If you’ve ever been to a hotel more whimsical and fantastic than Hotel Xcaret, let us know because we doubt it. This brand new hotel near Playa del Carmen, Mexico combines everything we love about Mexico into one luxurious package with unlimited access to some of the best excursions in the area, cenotes around every corner and the incredible food Playa has become known for. 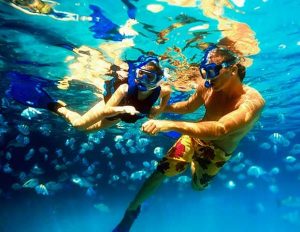 If you’ve been to the Yucatan Peninsula, you’ve probably been to or at least heard of one of the Xcaret parks. The family behind Xcaret has created over 9 different experiences to showcase the splendor of Mexico, it’s natural resources, animal life and history. Possibly the best things about Hotel Xcaret is that it’s All Inclusive plan includes unlimited access to ALL of the Xcaret parts. That means for no additional cost, all your excursions to Xcaret, Xel-Ha, Xplor, Xplor Fuego, Xavage, Xoximilco, Xenses, Xenotes and Xichen are included in the cost of your stay as many times as you’d like to go! The value of these inclusions raises the bar so high, we’ve struggled to find a value-add to match. 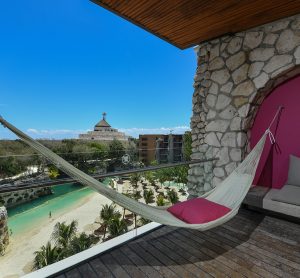 Hotel Xcaret was built with the environment in mind. Many hotels tear out and discard limestone, trees and other natural resources during their construction. Xcaret is built on top of cenote, a sink hole in the limestone that usually fills with fresh water and are very common on the Yucatan Peninsula. Instead of paving over the cenote or filling it in with rubble, Hotel Xcaret embraces it in every sense. Beaches can be found throughout the property along the cenote’s waterways. Any limestone removed from the site was re-used as a construction material allowing the buildings to blend with their natural surroundings and appear as if they always belonged there. Trees that were removed during construction were re-used throughout the hotel rooms allowing their decor to achieve a remarkable rustic-sheik.

For all its efforts sustainability, Hotel Xcaret has received many certifications and awards including the United Nations Global Compact, Earth Check and works in partnership with many local wildlife conservation programs.

Taking their environmental and sustainability efforts to the next level, Hotel Xcaret has taken the theme throughout the property and named each of its buildings after one of five elements, Casa Viento, Casa Tierra, Casa Agua, Casa Espiral and Casa Fuego.

As mentioned, when Hotel Xcaret was built, the architects kept the existing environment in mind during all phases of construction. As a result, Xcaret utilizes the cenote it sits on in ways we’ve never seen a hotel attempt. Beaches, tunnels, rope bridges over the jungle and even a restaurant in a cave add to Xcaret’s incredible landscape. The spa at Xcaret is carved into the limestone. How many other hotels in Mexico offer massages in a cave?! 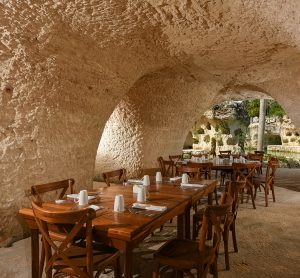 With 900 rooms and space to handle three times that, you’ll never run out of things to do and explore at Hotel Xcaret. The property includes the usual resort amenities including 3 gyms, 10 restaurants, 8 bars and pools throughout the property but Xcaret does so much more. Enjoy a swim on the stunning ocean-side beach or find a secluded cenote beach and take a dip in the cool, fresh water river. Kayak through the cenotes or hike jungle trails across bridges and tree-top walkways all without leaving your resort.

If you want a mind-blowing, five-star, uniquely Mexican experience, Hotel Xcaret is the only property to consider.

Ask us to help design your perfect Hotel Xcaret vacation!